In the collection of artefacts from Baker’s Flat, there are fourteen religious medals. Of these, eleven feature Mary, mother of Jesus. These include medals of the Sacred Heart of Mary, Our Lady of Sorrows, Mary Refuge of Sinners, and Mary Mother of God. Seven are miraculous medals.

Miraculous medals were first struck in 1832, following three visions received in 1830 by Catherine Labouré, a Sister of the Paris Daughters of Charity. The visions took the form of the Virgin Mary inside an oval frame, standing on a globe and wearing rings with shining rays. Around the frame were the words Ô Marie, conçue sans péché, priez pour nous qui avons recours à vous (O Mary, conceived without sin, pray for us who have recourse to thee). There was also a circle of twelve stars,  the letter M surmounted by a cross, and stylised Sacred Hearts of Jesus and of Mary. The images were put on religious medals in the hope that those who wore them would receive great graces.

In the Baker’s Flat collection, four of the miraculous medals are in French, two in English and one in German. 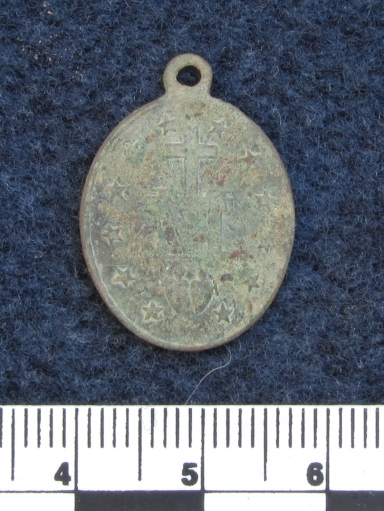 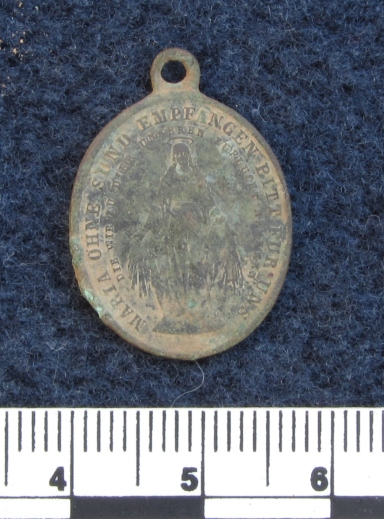 The medals are consistent with a Catholic community, but just as much with a specifically Irish community. The Irish have traditionally had a marked devotion to Mary, dating back as far as the sixth century (O’Dwyer 1986:72). Douglas Hyde’s 1906 collection of prayers, The Religious Songs of Connacht, furnish some proof of this devotion with many of the traditional songs and prayers directed to Mary (Hyde 1923). To me, these medals act as another signifier that the Baker’s Flat community was Irish Catholic.