Mystery metal man – could he be Charles Gavan Duffy?

A little while ago, I wrote about the small metal bust of an unknown man, found some years ago on Baker’s Flat. I had a theory it might be Gladstone. But now there’s another contender. One of the followers of this blog, who lives in France, thinks my mystery metal man might be Charles Gavan Duffy. (Thank you, Ann.)

Duffy was born in Ireland in 1816, studied law, became a journalist and poet, was a well-known Young Irelander and land reform activist, and helped established a weekly journal, The Nation, which supported Daniel O’Connell’s movement for independence.  He was elected to the House of Commons in 1852, but in 1855, despairing of Ireland’s chances of independence, he resigned and moved to Australia with his family.

He settled in Melbourne, became a politician, and was the eighth Premier of Victoria. Apparently, he was one of the most colourful figures in Victorian political history. He later retired to France, and died in Nice in 1903. So … a rebellious Catholic Irishman, known for his land reform ideals. A good fit with the people of Baker’s Flat? The photos below show Duffy, and the mystery metal man. Maybe it’s him?

Charles Gavan Duffy, 1850. From the image collection of the National Library of Australia (http://nla.gov.au/nla.pic-an9482275) 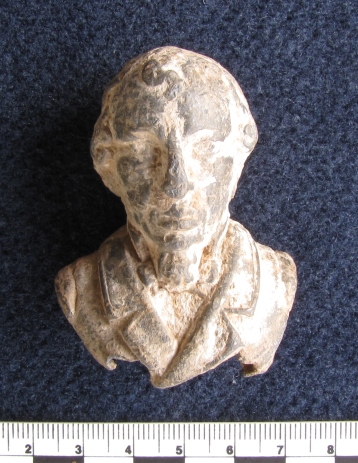 And because nothing’s ever simple, there’s another mystery – Duffy was buried, according to the records, in Glasnevin Cemetery, Dublin within the circle of the Daniel O’Connell monument. But Ann (in France) has been part of a group which helped to clean up his grave in Nice. So where is he really?

2 Responses to Mystery metal man – could he be Charles Gavan Duffy?