In search of a clachan, and Fr Ted’s house

During my wanderings in Co. Clare recently, I was studying a map and saw a reference to a Deserted Village. Well, that was enough to pique my interest, and I determined to try and find it the next day. I worked out my route carefully, selecting a clockwise direction to make the best use of time. Woke up bright and early, made a quick detour to Ennis for a cup of tea and a look at the well-worth-it Friary, then off to Corofin for the museum and the pottery.  I had allowed time for a short stop at Killinaboy Church because it has a very well-preserved sheela-na-gig above the door in the south wall. 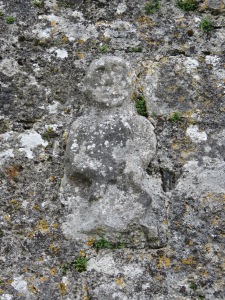 At this point, I realised I was less than a mile from Fr Ted’s house, and who wouldn’t go and have a look, given the opportunity? Next time, I am definitely going to stop and have tea there.

Fr Ted’s Parochial House, Co. Clare – you can have tea there

At this stage, hunger was getting the better of me, so I decided to change direction to clockwise, because this would get me to Ballyvaughan more quickly, and the prospect of a pot of tea and a BLT was very enticing. Stopping only for a few moments at Carron Church (12th century walled church, with a marker cairn) and Poulnabrone Dolmen (Burren icon), I was successful in Ballyvaughan, but was now heading towards the Deserted Village much later than I had planned.

Still, it was June and the days were long. I followed my Ordnance Survey map, passed the turnoff on the left where I thought it might be, and decided to drive to the next crossroads to make sure. There, I met an old man, who told me that I was at the right place, but that it was on private land and not publicly accessible. However, by sheer good fortune and the luck of having arrived in that exact spot three hours after I had planned, he pointed me to the jeep that I was blocking on the road and which happened to hold the landowner. After a brief conversation about why an archaeologist from Australia would be interested in his deserted village, he led me up some unmarked roads and showed me the walking route up the hill.

And at the top of the hill, in the mist, I walked into the remains of a clachan. Clachans were a particular type of settlement in Ireland,  common in the 18th and 19th centuries, but pretty much gone from the landscape by about 1900. Essentially, they were a group of farm dwellings and outbuildings that were clustered together, and the people who lived there farmed the surrounding land communally. Unlike standard villages, clachans didn’t have services like a church, shops or pubs.

The remains of a clachan, Co. Clare

All the indications are that Baker’s Flat was a clachan, the first to be recognised as such in Australia, hence my excitement at this one in Clare. The rain came in, and I got soaked through, because I’d foolishly left my raincoat in the car. And when I got back to where I was staying, I left my shoes outside because of the muck, and a cat peed on them during the night. But my excitement has remained undiminished.

6 Responses to In search of a clachan, and Fr Ted’s house