How goes the shamrock in Ireland?

The shamrock. A familiar Irish symbol, featuring alongside the harp and round tower, thatched house and donkey on all sorts of material destined for the tourist market. Witness my new socks below.

In primary school, we learned how St Patrick used the shamrock to teach the mystery of the Holy Trinity to the Irish pagans. My father wore a sprig of shamrock on his lapel, on the way to Mass on St Patrick’s Day. He had to find it in the neighbour’s garden or in the field across the road because, being a singular gardener, he would not have allowed such a weed to flourish in his own lawn.

Much later, after I’d moved to Australia, my mother would send fresh shamrock to me every March. This was special shamrock, prepared for the emigrant market, sold in the post office in a see-through envelope, roots removed and sprayed to kill any bugs. It either never arrived at all—I had a number of notices instead from the Australian quarantine service saying it had been stopped in its green tracks by their good offices—or it got through as a green slime, contained by the plastic envelope. After a while, Mam sent badges instead, with harps and flags on them—these were more successful.

There are references to earlier emigrants than me taking the shamrock with them to America. During the Famine, for example, people left the O’Connor Estate at Ballymoe in County Galway carrying shamrock:

At that time emigrants always carried in their little tin trunks—holy water, an oatmeal cake, a fat hen (cooked), a glass of whiskey in a small bottle in case of sea sickness—and they never, never, on any occasion, forgot to bring a bunch of shamrocks and a sod of turf cut from their parents’ turf bank.
National Folklore Collection 485:218-219; KK (78), Ballymoe, County Galway. Collector: Kathleen Hurley, March 1938.

When the Celtic Revival came along in the nineteenth century, it went hand-in-hand with a rise in patriotic nationalism among the Protestant Ascendancy, who had come to identify with their adopted land. Traditional national symbols like the shamrock, wolfhound and harp were joined by other symbols such as the round tower, Tara Brooch, Celtic cross and Book of Kells. All helping to establish a ‘material basis for an Irish national identity’ (Hutchinson 2001:510).

All of this makes me see the shamrock today as one part of a constructed Irishness. An Irishness created first by the Protestant minority to shore up their own nationalism and identity, then adopted by middle class Catholics, and filtering through to the broader community. Ultimately taken on willy-nilly by a newly independent Ireland of the early twentieth century, and absorbed into the national psyche. It means that everybody has an idea about what Irishness is but nobody can define it precisely. Maybe this is what Michael Billig (1995) refers to as ‘banal nationalism’?

Either way, the shamrock is alive and well in modern Ireland. Keogh’s crisps have a shamrock and sour cream flavour. Not as good as their sweet chilli and Irish red pepper flavour in my opinion, but they still give Tayto a run for their money. 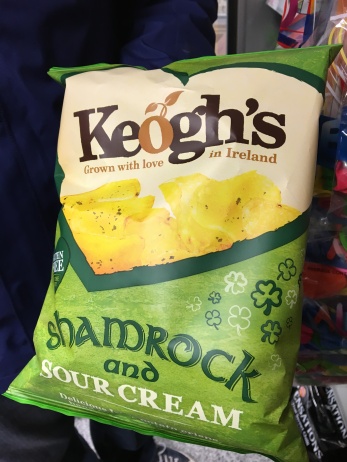 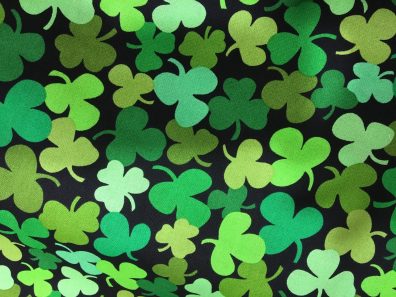 Shamrocks for a quilt or skirt, anybody?

I am still coming to terms, however, with shamrock protection. In the gift shops of Dublin, I came across Irish condoms, selling at three for 5 euros. Who wouldn’t be without a bit of protection at that price? And that cheeky green shamrock suggesting that you ‘Rub me for luck’. 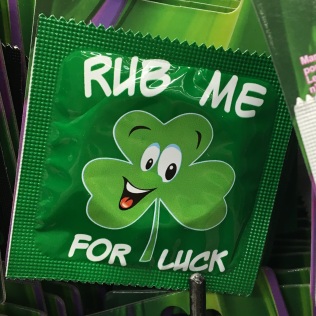 Personally, I think I’ll stick with the socks. Or a nice view of the sea.

Shamrocks on a fence at Dun Laoghaire east pier

4 Responses to How goes the shamrock in Ireland?