Tales from the trenches – the wee tree

The image below records, from a bird’s eye view, the excavation at Baker’s Flat in April this year. Look to the top left and you can see our four work vehicles lined up. To their right the trench – Trench F – with a large spoil heap beside it. In the context of the overall site, it looks tiny and insignificant!

Below the trench is the blue marquee where we bagged and labelled artefacts, right beside our favourite pepper tree where we had lunch and breaks. You can see the plough lines where the wheat was sown, and so yellow because the wheat stubble was still knee height when we were there. 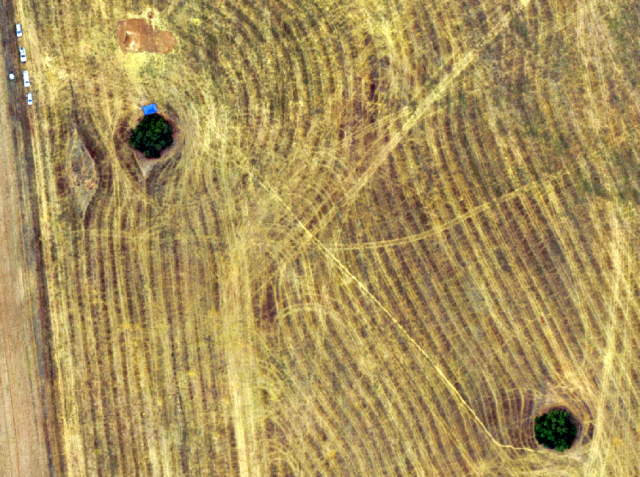 At the bottom right of the picture is our other favourite pepper tree, colloquially known as the wee tree. We used its facilities regularly over the course of the fortnight. And look, you can see a line through the stubble, where we walked up and down to the wee tree. See the fork in the road near the top where people were either going under the pepper tree or back to the trench; the line is not so defined here as the rest of the walk, where we clearly followed each other like sheep along the path of least resistance. We didn’t even know we were doing this.

After we left, a flock of sheep was put into the paddock to clear the wheat stubble. So the toilet walk would have lasted for maybe a month. But it was captured using a drone by Ian Moffat, stitched together by Jarrad Kowlessar, and recognised by me and Jarrad. Is this an archaeological example of an archaeologist’s work? It’s certainly the remains of human activity, although ephemeral, and we’ve recorded it, even if we didn’t know we were doing so.

2 Responses to Tales from the trenches – the wee tree