From April through to the beginning of May, I led a trusty band of volunteers in the first excavation at Baker’s Flat. For me, this was an experience that engendered a wide range of emotions. At some stages I was filled with excitement, joy, exhilaration. At others, it was more like fear, apprehension, trepidation. So much thinking – before, during and after the excavation – encapsulated in the photo below, of me deep in thought.

If you glance back to my previous blog post about the geophys and the first picture of the results (scroll down!), you’ll see some clusters of white blobs near the top left. These results helped me make the decision to open Trench A at the location shown below. Sure, it looks like a random spot in an otherwise empty paddock, but it was precisely chosen to cut across the area that I believed held structures. 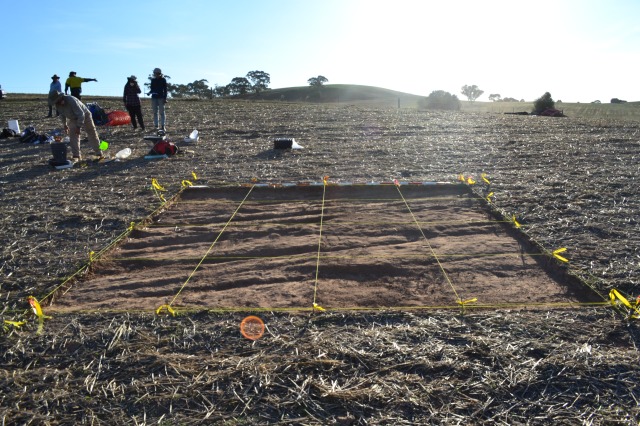 On day five, things started to get interesting. You can see in the photo below that there are metal artefacts emerging. And just as exciting, two round post holes – one near the southern end in the image below, and another under one of the bars from a bedhead (yes, that’s what those twisted bits of wire are). Incidentally, the rusty-looking rectangular object between the post holes turned out to be a very large and heavy door lock case. 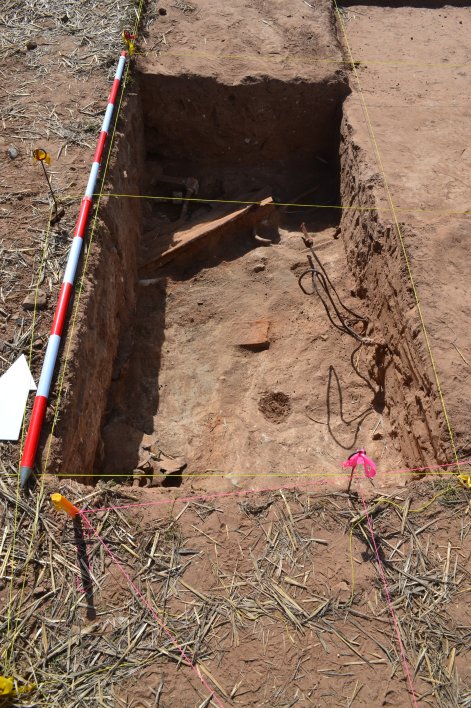 At about this stage, I had to say a sad goodbye to the first lot of excavators, the crew from this year’s Conservation Field School. However, in true archaeological tradition, a couple of them returned later in the season bringing, respectively, scones and beer. So yay for Flinders archaeology students! 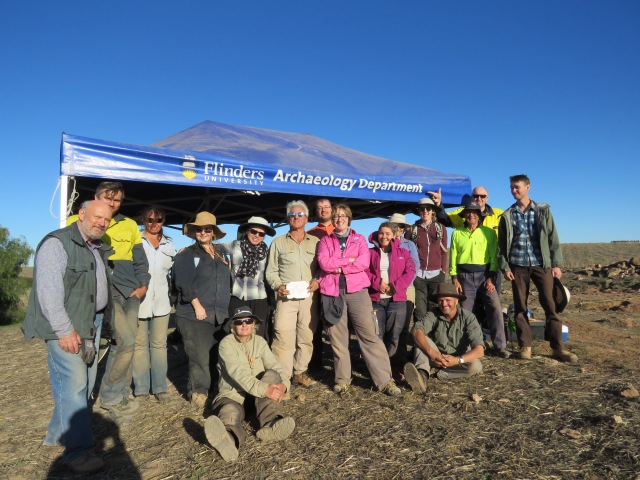 The digging continued, and when you look at the photo below, you can perhaps marvel at the fact that most of the dirt from this trench was removed using small trowels. In reference to the image above of two squares in Trench A, you can still see the bedhead at the bottom right of the picture below, and the rusty rectangle where the door lock case had been.

We extended the trench west (left side of the picture), and at the stage shown below, we had exposed the dugout wall and were beginning to get hints of the floor surface to the east. The area where most of the work is happening was a collapsed roof comprised of thatch and a later surface of corrugated iron. This was being removed slowly and carefully, and clearly needed at least the same number of people watching as working!

At the completion of this year’s field season, here is Trench A and its dugout revealed. The dugout wall is at the west side. Those hardy Irish migrants would have dug into the rise of the hill to form a shelter wall, and continued to dig out a level floor surface to the east, including channels to form partitions.

Given my recent experiences with dust and wind on the rise of Baker’s Flat, I have new admiration for the resilience of these diggers, but also for the benefits of a limestone floor, which would have been simple enough to keep clean. A light sprinkling of water, and a few moments’ hard work with a broom would have been sufficient to sweep the floor clean of dirt and grubbiness.

Notwithstanding my admiration for the limestone floor, I was content enough to lay down the trowel at the end and head for the comforts of a 21st century home.